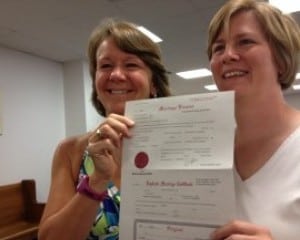 The Pennsylvania Department of Public Health today filed a state lawsuit to prevent Montgomery County and its clerk, D. Bruce Hanes, from issuing marriage licences to same-sex couples, the AP reports. Hanes first started granting marriage liscenses to same-sex couples last week, compelled he said by the ruling in United States v. Windsor and a desire to be "on the right side of history." While Pennsylvania does not ban same-sex marriage in its constitution as many other states do, the state did pass a law in 1996 that defines marriage as being between a man and a woman and goes even further in not recognizing same-sex unions codified out of state. It is this law that Hanes, an independently elected Democrat, is accused of "repeatedly and continuously" flouting in the suit filed by the state. Meanwhile, Montgomery County solicitor Ray McGarry has insisted that the county will continue to issue marriage licenses to gay couples and believes the state's lawsuit "has serious flaws." That lawsuit seems to be particularly concerned with illegal requests for benefits and the alleged "administrative and legal chaos that is likely
to flow from the clerk's unlawful practice of issuing marriage licenses
to those who are not permitted under Pennsylvania law to marry." 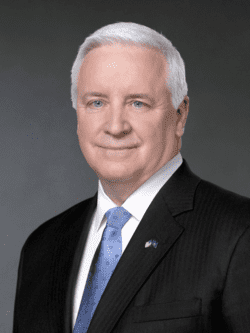 Hanes' move to issue marriage licenses to same-sex couples has recently sparked protests and drawn the ire of the Natonal Organization of Marriage. The state's decision to challenge Hanes in court comes the same day that Pennsylvanian Governor Tom Corbett (R) announced, after much speculation, that he would defend the state's law defining marriage in Pennsylvania as being between a man and a woman in a federal lawsuit brought by the ACLU. Democratic state Attorney General Kathleen Kane previously stated she would not defend the law on the grounds that it was discriminatory, a decision which displeased Governor Corbett and The Pennsylvania Pastors Network who called her refusal to defend the law, "a direct attack on the integrity of the family." According to the AP, "[Corbett's] General Counsel James Schultz said that Kane's refusal 'establishes a very troubling precedent.' "This will create chaos and uncertainty – not unlike what we are seeing in the unlawful actions' of Hanes, Schultz wrote."

Perhaps most troubling in this case is the fate of the 34-or-so same-sex couples in Montgomery County that have received marriage licenses as of Tuesday afternoon, liscenses that could potentially be nullified should the court rule against Hanes.

Previous Post: « Russian LGBT Group Urges ‘Do Not Boycott The Olympics – Boycott Homophobia!’
Next Post: New Science Standards In Kentucky Called ‘Necessary’ By Some, ‘Fascist’ By Others »