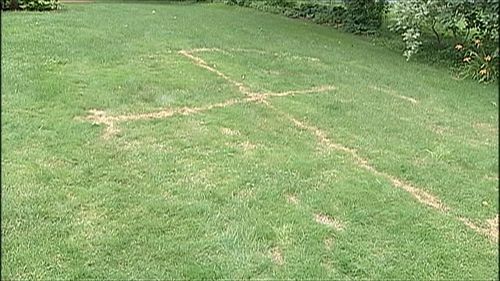 The FBI has offered assistance to a Sarver, Pennsylvania family after they found a swastika burned into their lawn. John Namey, the family's father, says they are being targeted because his daughter is gay, WPXI reports:

Namey said this incident is not the first personal attack against his family. Namey showed Channel 11’s Vince Sims pictures taken a few days ago of his stepson’s truck, which was covered in pink paint and had a derogatory image super glued in coins on the hood in addition to two flat tires.

Namey said he thinks he knows why his family is being targeted.

"We have a 16-year-old daughter who is openly gay, and she has been targeted in school because of that," said Namey.

“Ignorant and uneducated” is how Namey described the people that are lashing out at his daughter.

"Grow up. Let people be who they are. Don't judge people based on race or sexual orientation. Everybody is different. Just let people live their lives and be happy," said Namey

A video report from WPXI can be viewed here.