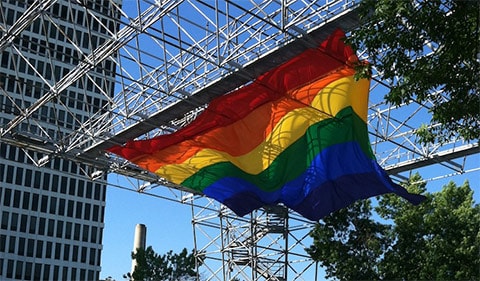 Late last week, a dispute took place over the display of a rainbow flag at the Monroe County Office Building in Rochester, New York after the County Executive Maggie Brooks (R), declared that the county could not display the rainbow flag in support of LGBT pride because it's against county policy to display "issue-based" or "advocacy" flags. While the city of Rochester is widely viewed to be LGBT friendly, as of late, the county administration has come under fire for not being inclusive enough when it comes to LGBT rights. Unsatisfied with Brooks' ban on the rainbow flag, Democrats in the county legislature decided to display the flag regardless of the County's disapproval. However, when Staff Director for the Democratic Caucus Joe Rittler affixed the rainbow flag outside his office window, local officials quickly took down the flag and a stand-off emerged, Democrat and Chronicle reports:

"[Rittler] went downstairs to see how it looked, and when he came back, Sheriff’s Office personnel assigned to the building had arrived to take it down. There was brief talk of an arrest, but when Rittler put his hands behind his back, he said security walked past him and removed the flag.

Rittler went out and bought another one.

Rittler again hung the flag out his window, saying it was affixed it in the same manner, and waited with Legislature minority leader Carrie Andrews, D-Rochester, for security to come back. This time, security left them alone, and the flag remained up.

“Although they were able to remove the flags using the sheriff’s department, the LGBT community can rest assured that we will not be bullied. A new Rainbow Pride Flag is now proudly flying outside our office,” Andrews said in a statement."

According to County spokesman Feasel, neither he nor Brooks were involved in the flag's removal.