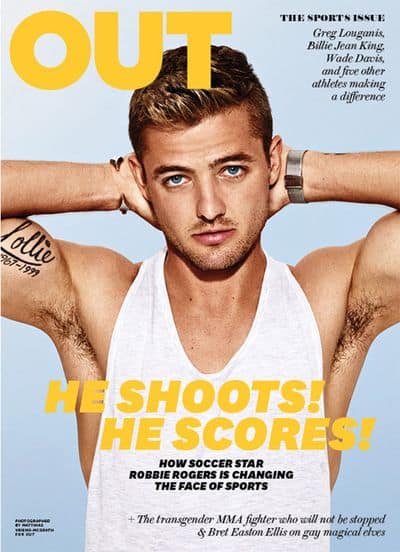 PHOTO OF THE DAY: Robbie Rogers struts his stuff for OUT Magazine's sports issue.

Right-wing nutjob and anti-everyone activist Pat Robertson wants the public to know that he isn't anti-gay, it's just that gays are sick and wrong. In his latest entry in a series looking at life after the Supreme Court rulings, Ari Waldman takes a look at Justice Scalia's withering dissent of the DOMA case. A transgender nursing student in Florida has been threatened with expulsion because she dared to use the women's restroom and apparently Justin Bieber and President Clinton are all cool now.

Things are looking very promising in Pennsylvania where after the Attorney General announced that she will not defend the state's anti-gay marriage law a judge with a rather liberal track record was named to the case.

After Andrew Garfield wondered why Spider-man can't explore his gay tendencies, the real gay Spiderman has been discovered! Openly gay singer-songwriter Eli Lieb takes a look back at his own history with puppy love. A gay aerial duet on last night's America's Got Talent inspired a very gay moment between Howard Stern and Howie Mandell. And for those of you still watching Two and a Half Men, apparently Charlie has a lesbian daughter that will be making an appearance.

Huffington Post's comedy section provides us with the joy that is boys twerking to classical music.