Sinful Catholics can now earn indulgences, reducing the time they'll have to spend in purgatory for their sins, by following Pope Francis on Twitter, the Guardian reports: 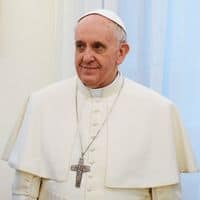 Indulgences these days are granted to those who carry out certain tasks – such as climbing the Sacred Steps, in Rome (reportedly brought from Pontius Pilate's house after Jesus scaled them before his crucifixion), a feat that earns believers seven years off purgatory.

But attendance at events such as the Catholic World Youth Day, in Rio de Janeiro, a week-long event starting on 22 July, can also win an indulgence.

Mindful of the faithful who cannot afford to fly to Brazil, the Vatican's sacred apostolic penitentiary, a court which handles the forgiveness of sins, has also extended the privilege to those following the "rites and pious exercises" of the event on television, radio and through social media.

"That includes following Twitter," said a source at the penitentiary, referring to Pope Francis' Twitter account, which has gathered seven million followers. "But you must be following the events live. It is not as if you can get an indulgence by chatting on the internet."

The Vatican also plans on opening a Pinterest account soon, according to the article, where you'll presumably also be able to buy time by pinning photos of red Prada shoes, and such. Though we doubt time on Venerabilis, the recently-reported  hook-up website for gay priests, will ever count.