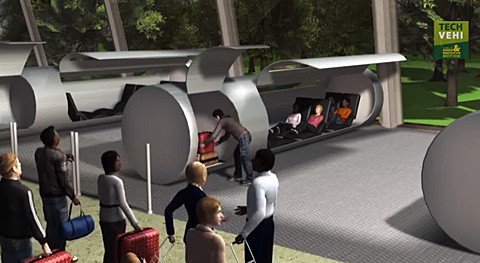 The Next Web reports that Elon Musk is getting ready to unveil an 'alpha design' for his next big idea:

Entrepreneur and Tesla Motors CEO Elon Musk will publish an “alpha design” for Hyperloop, an entirely new form of public transportation that is faster than the bullet train and potentially self-powering, on August 12.

Details about Hyperloop are slim, but it’s clear that as always Musk has lofty ambitions for the project. He has described it in the past as a “cross between a Concorde, a railgun and an air hockey table,” although that says little as to its form factor or underlying technology.

Musk, the man behind both Tesla Motors and SpaceX, has spoken about a high-speed transportation system known as the Hyperloop, a tube transport system that would allow passengers to travel at high speeds. The proposed system could reduce trips between San Francisco and Los Angeles to minutes, and reaching the East Coast from California could take under an hour. Crazy as it seems, the company ET3, based out of Longmont, Colorado, has already been hard at work making this a reality…

A video about the ET3 Evacuated Tube Transport, AFTER THE JUMP…