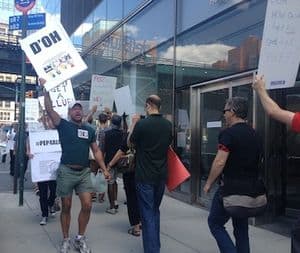 Taking a break from their recent protests of human rights atrocities taking place in Russia, members of ACT UP in New York City took to the streets in front of the Department of Health and Mental Hygiene (DOHMH) this past THursday, August 15, to protest the lack of funding and education surrounding PrEP (Pre-Exposure Prophylaxis) and PEP (Post-Exposure Prophylaxis) as effective means to prevent the transmission of HIV. Approximately 25 group members were gathered that afternoon, carrying signs with slogans such as “D’OH! I refused to fund PEP. Now 1000’s of NYers will get HIV,” “The ‘Healthcare’ Mayor Missed HIV,” and “Pozitively FRAUDulent & Absolutely NEGligent.”

ACT UP, best known for their pivotal roles during the initial outbreak of HIV and AIDS and the documentary How To Survive A Plague, organized the demonstration as a response to rapidly-increasing infection rates among young gay men and trans women. They allege that DOHMH committed "negligence and fraud" by failing to collect data on these new infections, and by presenting condoms as the only effective method for preventing the spread of HIV. Several ACT UP members could even be heard yelling  “Give us data! Give us numbers!” ACT UP activist Jim Eigo expanded on DOHMH's alleged negligence in the group's incendiary press release:

“ACT UP has told DOHMH to start an information campaign to tell New Yorkers about PrEP. Their answer? DOHMH is afraid that such a campaign would create demand for the drugs in advance of a network of doctors equipped to oversee their safe and effective use. What a vicious cycle of ignorance and inaction!”

The group previously protested outside of Mt. Sinai Medical Center, after a man entered its emergency room asking staff for PEP after a possible exposure to HIV. ER staffers allegedly had no idea how to treat the patient. In their report, Out magazine went on to explain precisely how the two treatments work:

"Typically prescribed as thirty daily doses of the antiretroviral drugs Truvada and Isentress, PEP medication is used to prevent HIV infection from taking root in the body after an exposure to HIV, typically in the form of condomless sexual contact with a partner who is HIV-positive or of unknown status. The exact mechanism of PEP is unknown, but Truvada and Isentress are also used to prevent the virus from multiplying in already-infected patients. PrEP is similar to PEP except that it is given prior to possible exposures, typically only to patients who have taken PEP before or who have a history of high-risk sexual behavior, to prevent any exposures to HIV from turning into an actual full-blown infection." 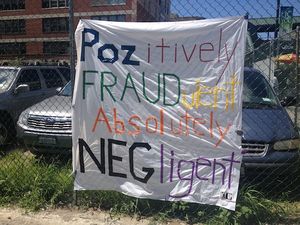 DOHMH responded to ACT UP's allegations in an email response to Out, in which a spokesperson promised that:

"We stand by the favorable results we have achieved in reducing citywide morbidity and mortality associated with HIV and in the quality of our data. Since 2005, we have seen an increase in the proportion of people diagnosed with HIV who are in treatment, a decrease in the number of HIV-related deaths, and an increase in life expectancy for people with HIV. From 2001 to 2011, the number of new HIV diagnoses in New York City declined by 40%."

You can read more exceprts from the department's statement on Out.com.

Dr. Alan Stein, an infectious-diseases specialist who treats many HIV/AIDS patients, disagrees with ACT UP, arguing that, while PrEP and PEP do play a role in reducing transmission, he still believes that condoms should be used as the first and primary line of defense:

“The way to curb the epidemic is to get more people tested. Then, once they are tested, getting them into treatment and staying on treatment. If you can do that, that will reduce the community viral load and the risk of transmission. Putting people on PrEP isn’t going to do that much to prevent further transmission of the disease. It’s more like individual protection. It’s not really a public health concept… While PrEP is important, and I do believe in it, I think it’s useful in select cases: someone who’s going to be compliant and adherent. It shouldn’t just be given willy-nilly to people who want to get it.”

Previous Post: « Russian Anti-Gay Policies ‘Could Kill Its Cities’
Next Post: Fear Lives On, Even In ‘Gay-Friendly’ Cities »