The American Kennel Club has called on the FCI to move the World Dog Show from Russia where it is scheduled to take place in 2016, because of Russia's human rights abuses against gay people. 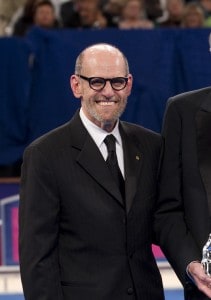 Here's the letter, via DogChannel.com:

One of the most compelling aspects of the human-canine bond – cherished internationally more than ever before – is the fact that our dogs love us unconditionally. Dogs do not discriminate. Gender, race, sexual orientation and other status do not enter the equation of responsible pet ownership. That is why the American Kennel Club and our constituency are puzzled and disappointed by the decision to allow Russia to host the 2016 World Dog Show. The proliferation of anti-gay and lesbian laws in Russia today is both disturbing and shocking to our community. The choice of this country as a venue for such a prestigious dog show flies in the face of the ideals of the human-canine bond.

As exhibitors, breeders, handlers and trainers, we teach our dogs many things. But there is no denying, they teach us too. Our bond with dogs is not defined by the type of person who holds the leash. We cannot support competition in an environment where tolerance does not exist.

Alan T. Kalter (pictured)
Chairman of the Board

Dennis B. Sprung
President and CEO

Allan Reznik, the Editor-in-Chief of Dog Channel, also announced that a scheduled feature on Russia for its November 2016 issue would be pulled:

A boycott of the Olympic Games is being called for and with the World Dog Show scheduled for Moscow in 2016 the FCI is facing pressure to change its venue unless these violations of basic human rights are rescinded. AKC President Dennis Sprung and Chairman Alan Kalter issued a courageous statement protesting Russian President Putin’s anti-gay law.

We have many gay breeders, exhibitors, handlers and judges proudly participating in our sport worldwide. In light of Russia’s violation of these basic human rights, and given the strides that have been made recently in the USA with respect to equal rights, DOMA defeat, etc., we at Dogs in Review feel it would be inappropriate to feature Russia in our November International Issue. We are not feeling particularly celebratory toward that country. Moreover, we urge our American judges with invitations to officiate in Russia to reconsider their assignments, at a time when visitors traveling there could be arrested and detained, with the blessing of the Russian government.