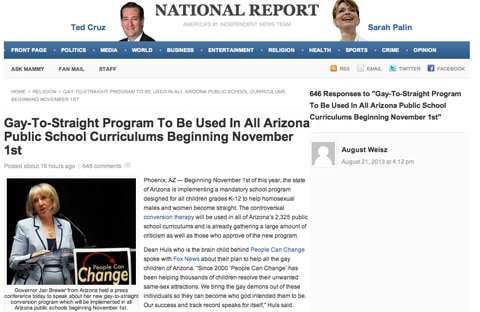 A report posted on a satirical (perhaps too realistically satirical) website yesterday that the state of Arizona would be instituting a "a mandatory school program designed for all children grades K-12 to help homosexual males and women become straight" is being blasted by Governor Jan Brewer as well as 'People Can Change', the unfortunate and unfortunately, very real group said to be behind the school program, the NY Daily News reports:

Meticulously crafted, the fake article cited Fox News, CNN as sources, and claimed that Arizona was partnering with the Virginia-based organization People Can Change, whose mission is to “turn men away from unwanted homosexuality.”

The report, which apparently duped many, sent parents scrambling and demanding answers from the school system and the governor's office, probably because it doesn't seem like much of a stretch for a Tea Party governor who has signed laws giving married couples priority consideration over gays in adopting children, and fought for the revocation of benefits for state employees' same-sex partners. 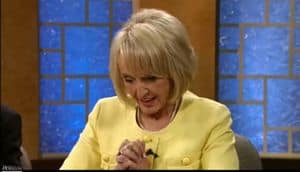 "It’s a completely phony and vile report, and its authors should be ashamed," Brewer spokesman Andrew Wilder said.

The article was submitted as a “press release” and posted on the news release dissemination site www.prlog.com. It gives no indication that it is intended to be satire and lists its source as a Fox News cable network story. There, it was viewed more than 70,000 times.

“The spokesperson is fake, the interview is fake, the photo with Arizona Governor Jan Brewer is fake, the press conference is fake — and the quotes are fake, rude, and demeaning of gays,” the People can Change site states. “People Can Change does not provide programs or services for minors. We are a peer-led support organization of men who have personally experienced significant change from unwanted same-sex attractions ourselves and who now share our experience and give support to other adults who voluntarily seek similar change.”