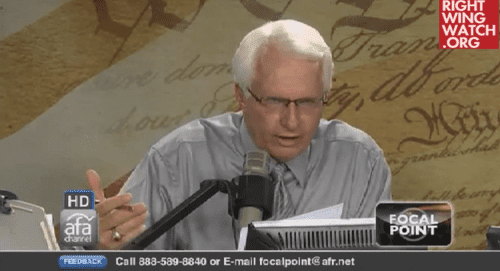 Just days ago, a recording was leaked in which San Antonio Councilwoman Elisa Chan called gay people "disgusting". She has spent the last few days defending her remarks against the subsequent outrage rather than apologizing, and claiming the the homophobic remarks were simply "taken out of context". Now, noted and vocal homophobe Bryan Fischer is rushing to her aid, claiming that the views she expressed are shared by a vast majority of the American people. 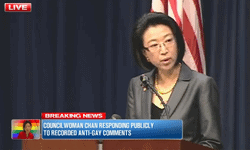 On his radio show yesterday, Fisher said that Chan should not apologize for her comments, since "these are things that anybody who is thinking rightly and clearly about homosexuality would believe.":

Of course, even if Fischer's statement has any base in fact, it is still hardly relevant. Even if a majority of the population doesn't find gay sexual activity to be appealing (which is, by definition, what would make them "straight" to begin with), it still does not justify discrimination against members of the LGBT community under the law. Furthermore, even if Chan's views are shared by other members of the American public does not mean she has the right to express them while executing public office.

Watch the video clip of Fischer's comments AFTER THE JUMP…