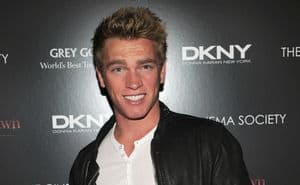 Take a look at Nick Gruber, and you may recognize him for a number of reasons. You may have seen his work as a fashion and fitness model, a gay porn actor, or simply Calvin Klein's former boytoy and train wreck. If so, then you should know that Gruber has enlisted the help of a new publicist, Matt Rich, to help erase most of that from your memory and brand him with a new squeaky-clean public persona. Gruber subsequently celebrated his newly-announced straighthood by attending a party thrown by porn-entrepreneur Michael Lucas on Fire Island over the weekend. Then, after reportedly telling people not to touch him, Gruber was kicked out of the event.

"This weekend was "Ascension" – the biggest party of the summer on Fire Island. Every year I buy a large VIP tent that's up above the dance floor, where I invite my friends.

I saw this arrogant guy who was being rude to people, shoving two guys away after they bumped into him. I heard him say, "keep your hands away from me! I"m straight!" So I went over to him, and asked him why he was being so rude.

Then he said, 'try me.' I said 'watch me'. I called over to security and had him hauled away without his feet even touching the floor. Then someone explained to me that this is the ex boyfriend of Calvin Klein, Nick Gruber, who just 'came out' as 'straight.'" 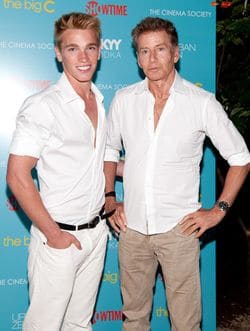 Not surprisingly, Rich released a different version of the incident to Gawker and Michael Musto on Gruber's behalf:

“Nick was the guest of Hal Rubenstein and David Nichols and wasn't familiar with how these mass events work in terms of ‘areas’ and VIP areas. Nick overreacted when he was told to leave one area. He is sending a private apology to Mr. Lucas. It was Nick’s first time at Fire Island, and he was glad to be there with several friends and support the cause.”

And as for Gruber's supposed aversion to phyisical contact with gay people? Rich explained that to HuffPost Gay Voices:

"After about the fifth guy grabs your ass, you say, 'Look, I'm not interested.' He apologized. He didn't know what kind of party this was going to be."

Gruber himself finally explained his reluctance to wear the "gay" label in his interview with Gawker:

"That’s false information. I don’t believe in labels, I believe in what my heart tells me I love. If people say, 'What are you?' I say, 'I’m not gay. I’m straight, but I believe in love.'"

Calvin Klein, Gruber's reported former "sugar daddy", has yet to comment on any of the latest controversy, instead opting to keep a low profile and finish building his mansion in Southampton by Labor Day, according to the New York Post.