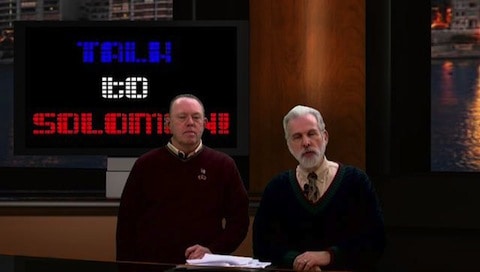 Stan Solomon, conservative host of The Talk To Solomon Show LIVE, has a reputation for saying hateful and blindingly ignorant things on his show. Right Wing Watch has his most recent show, and on it he goes on a maniacal hate-rant against everyone who's not a straight, white, Christian.

Jews, homosexuals, blacks, gays, Islamists, you may think they’re disparate groups, they’re not, they’re all tools. Because while we’re mad at these two punks, we’re mad at Trayvon Martin, that thug that deserves to be dead and I’m glad he’s dead.

Pieces of crap, homosexuals like what’s that one guy’s name? [Dan] Savage. That faggot. That horrible, awful, terrible excuse for a human being who is at the White House promoting attacks on Christians. I hope he dies — he probably will — of every disease known.

The level of vitriol is simply unreal. He later advocates for "stand your ground" type vigilantism, and though he attempts a cover-your-ass statement of equity with "I don’t give a damn if you’re white, black, pink or purple," it is completely undermined by the blatantly racist claim, “If you’re white, you’re a target. Get a gun, know how to use it, never be without it and don’t leave your family unprotected.”

And, of course, no contemporary bigoted rant is incomplete without snide jabs from a paunchy middle-aged man at the physical fitness of the First Lady:

They have that Michelle O-Buick butt Obama’s you know, by the way, she doesn’t eat that crap, she eats like a garbage disposal at a fast food joint.

The videos from his show, if you can stomach them, can be seen AFTER THE JUMP…

Previous Post: « What The Death Of DOMA Means For Medicare
Next Post: WATCH: A Stunning Timelapse Video of the Disastrous California Wildfire »