The Gay European Tourism Association is calling on the European Commissioner for Home Affairs, Cecilia Malmström to suspend negotiations on proposals that would give 15,000 Russian officials the right to travel throughout the European Union without visas because of Russia’s recently introduced anti-gay laws. 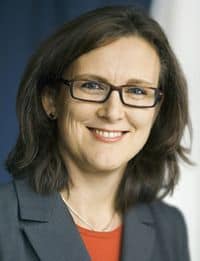 Via press release from GETA:

In the letter Carlos Kytka, Executive Director of GETA, says that “in the 1930s Europe’s failure to speak and act against the state sponsored attacks on sectors of German people, including homosexuals, sent the wrong message to the Nazi Party and emboldened its actions with disastrous consequences for Europe.  The European Union has recently been awarded the Nobel Peace Prize and has a duty to act firmly to show its distaste for European countries that threaten the peace and nature of our continent through its repressive actions”.GETA has also written to the 48 MEPs who earlier this year expressed their concerns about liberalising visa restrictions for Russian officials because of the country’s human rights record, drawing their attention to the subsequent worsening situation and asking them to maintain their opposition.  The European Parliament has the power of veto over all EU bilateral agreements and could scupper any deal with Russia.GETA is also currently lobbying the International Olympic Committee and European sports ministers to ensure that gay people travelling to Sochi for the Winter Olympics are free to express their support for gay rights without fear of intimidation, violence and arrest.