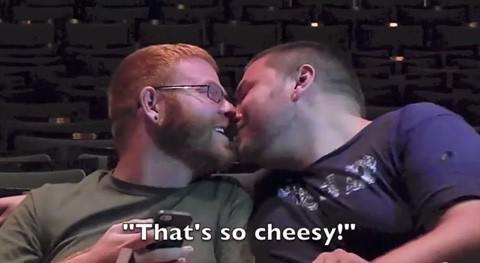 Adam, who proposed to his boyfriend Nathaniel on August 12, writes, on YouTube:

Nathaniel's godmother (whom I had never met) had been inviting us to visit her in Hawaii for some time. When we decided to go for our 7th anniversary, I started planning a surprise proposal with her help!

I toyed around in theater in high school and college, Nathaniel used to work in a movie theater, and we're both big film buffs. So, I reached out to the Hawaii Theater Center in downtown Honolulu about the possibility of a fascinating but mostly for-show private tour culminating in a private exhibition. With their enthusiatic support, I began the months-long process of filming as many of our friends and family as possible for a Birthday/proposal movie.

The end result is one of the happiest moments of our lives… so far!

No date is set, and frankly, we're in no rush since it's not legal in our home state of Florida anyway. The demise of DOMA was just the beginning. Support full marriage equality!