Last week, Towleroad reported that Human Rights Watch and the Committee to Protect Journalists (CPJ) sent a letter to the IOC demanding that candidates for president of the organization (Jacques Rogge is due to be replaced next month) make their views known on Russia's anti-gay laws and steps they would take regarding the Sochi Winter Games. 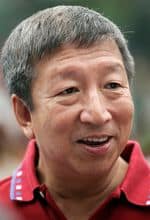 One of those candidates, Mg Ser Miang, a Singaporean supermarket chief who is also a VP of the IOC, made clear today that he has no plans to do anything, because it's going to be a "wonderful" games.

"Sochi has put in quite heavy investment because of the need for them to develop a lot of infrastructure," Ng told AFP in an interview at his office in Singapore.

"This anti-gay law, we now have a written assurance from the highest authority that there will be no discrimination of any kind, respect to the provisions of the Olympic Charter as well as the fundamental principle against discrimination of any kind. So the rights of those who are attending the Games, from spectators, to officials, to media, especially the athletes, will be respected. I believe that Sochi will be a wonderful Games."

He added: "In some of these issues I believe in quiet diplomacy to deal with these issues," he said. "It's a common goal that we want to have a successful Games and the IOC is very clear and very strong — the IOC is against discrimination of any kind."