Singer Linda Ronstadt's beautiful voice has been silenced by Parkinson's Disease. She can no longer sing, she tells AARP: 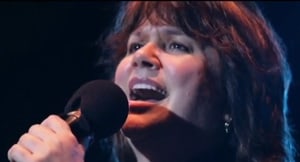 In a wide-ranging interview with AARP’s music writer Alanna Nash to be published on aarp.org next week, Ronstadt revealed how she discovered that “there was something wrong” with her voice.

“I couldn’t sing,” she told Nash, “and I couldn’t figure out why. I knew it was mechanical. I knew it had to do with the muscles, but I thought it might have also had something to do with the tick disease that I had. And it didn’t occur to me to go to a neurologist. I think I’ve had it for seven or eight years already, because of the symptoms that I’ve had. Then I had a shoulder operation, so I thought that’s why my hands were trembling.

“Parkinson’s is very hard to diagnose, so when I finally went to a neurologist and he said, ‘Oh, you have Parkinson’s disease,’ I was completely shocked. I wouldn’t have suspected that in a million, billion years.

“No one can sing with Parkinson’s disease,” Ronstadt said. “No matter how hard you try.”

Ronstadt walks with the aid of poles when on uneven ground, and uses a wheelchair when she travels.

Listen to Ronstadt sing "Blue Bayou" and an ABC News report, AFTER THE JUMP…

Previous Post: « Trying Out the Latest in Men’s Fashion
Next Post: ‘The New York Times’ Endorses Christine Quinn for Mayor »