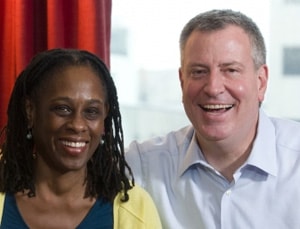 Wrote Dowd in the column:

At the Good Times coffee shop in Greenwich Village on Monday, de Blasio and his wife, Chirlane McCray, sat down to talk, pleased that they were no longer “laboring in the vineyard,” as the candidate dryly put it.

Asked why Quinn was not rallying women, McCray, a mother of two, replied. “She’s not accessible. She’s not the kind of person I feel I can go up to and talk to about issues like taking care of children at a young age and paid sick leave.”

Last spring, McCray did an interview with Essence magazine about her feelings about being a black lesbian who fell in love with a white heterosexual, back in 1991, when she worked for the New York Commission on Human Rights and wore African clothing and a nose ring and he was an aide to then-Mayor David Dinkins. With her husband, she was also interviewed by the press in December and was asked if she was no longer a lesbian, and she answered ambiguously: “I am married. I have two children. Sexuality is a fluid thing, and it’s personal. I don’t even understand the question, quite frankly.” 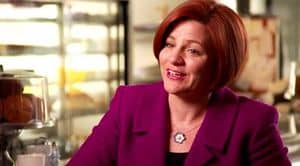 Said Quinn in a statement today:

“There are women all across the City who don’t have children for any number of reasons, whether they simply can’t, choose not to, or circumstances don’t afford them the possibility. I have taken a number of shots in this race from the men running against me, and I accept that as par for the course in a political campaign. But to criticize me as not understanding what young families go through because I might not have children, is over the line and I take great personal offense to the comment, as does my wife. As young teenage girls, both my wife and I lost our mothers and the decision to have children is a deep and personal one that we should be afforded the opportunity to make, without aspersion.

Here’s what I know about raising a young family: I know that young families struggle every day to provide for their kids, make sure they have a good education, and can afford to give them everything they need. It’s why I led the fight for mandatory kindergarten city-wide, it’s why I increased the number of pre-K slots available in New York City, it’s why I have been a staunch advocate for ensuring that children get access to breakfast at school, and it’s why I have made reforming our public education system one of the cornerstones of my campaign.

I have spoken fondly of Ms. McCray and Mr. de Blasio’s family. It’s unfortunate that they cannot do the same about mine –no matter how different it might be from theirs. But for anyone who is interested, I have a large, loving family of Catullo's and Quinn's, with 10 nieces and nephews who I absolutely adore, like they're my own."

The NYT has now updated the Dowd column with a longer quote from McCray, presumably in response to the headlines it created.

An earlier version of this column incorrectly quoted a response by Chirlane McCray, the wife of Bill de Blasio to a question about Christine Quinn. The column has  been updated to reflect the full response.

And update the quote:

Asked why Quinn was not rallying women, McCray, a mother of two, replied: “Well I am a woman, and she is not speaking to the issues I care about and I think a lot of women feel the same way. I don’t see her speaking to the concerns of women who have to take care of children at a young age or send them to school and after school, paid sick days, workplace, she is not speaking to any of those issues.  What can I say?  And she is not accessible, she is not the kind of person who you can talk to and go up to and have a conversation with about those things, and I suspect that other women feel the same thing I’m feeling.”