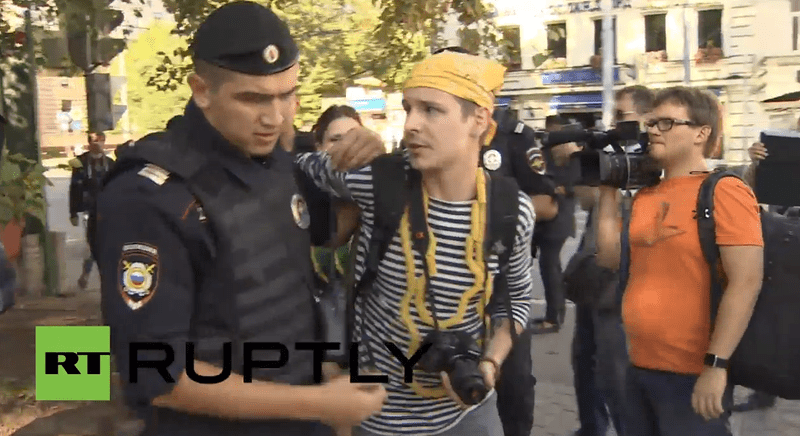 For those out there who haven't heard the good news of the Flying Spaghetti Monster, Pastafarianism is a satirical "religion" designed as "a thought experiment, satire, illustrating that Intelligent Design is not science, but rather a pseudoscience manufactured by Christians to push Creationism into public schools." This past Saturday, followers of the mock-religion planned to hold a "pasta procession" to commemorate the birthday of actor Robert DeNiro, who previously played a character named "Noodle" in the film Once Upon A Time In America.

They were, unfortunately, met with resistance by the Orthodox group "Bozhaya Volya" (or "God's Will"), who covered participants in ketchup. According to Raw Story, this is not the first time that "God's Will" has conducted public displays of extremism:

"The Orthodox group has held demonstrations against homosexuality, the punk rock group Pussy Riot, and the Darwin natural history museum."

The clash was then dispersed by Moscow riot police, who arrested and detained eight of the Pastafarians for holding an "unsanctioned rally". Or, as one supporter said on a group social networking page, "we were detained for simply walking. In particular, I was taken in for a sieve on my head.”

Earlier this month, the Russian government passed a law that criminalizes "insulting the religious sensitivities of believers,"which is no doubt similar to the anti-gay "propaganda law causing even more controversy in the Eurasian nation. Both come thanks to close cooperation between the Russian government and Russian Orthodox church.

Watch footage of the confrontations and arrests AFTER THE JUMP…