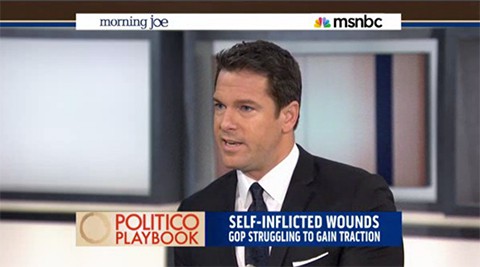 Out MSNBC anchor Thomas Roberts joined Joe Scarborough oh his "Morning Joe" talk-show today. Amidst discussion of the Republican National Committee's continued opposition to same-sex marriage in the party platform, Roberts discussed his own personal experience with the Republican leadership that seemed to him at odds with their publicly stated political beliefs:

"Reince Priebus, when I got engaged, congratulated me at the White House Correspondents' weekend. Last year, Sean Spicer congratulated me on getting married to my husband. Yet they incorporate into the platform of the RNC their stance against marriage equality," Roberts said.

In an email to Politico RNC Communications Director Sean Spicer clarified his position:

"Believing marriage is between one man and one woman and being polite, courteous and respectful are not mutually exclusive."