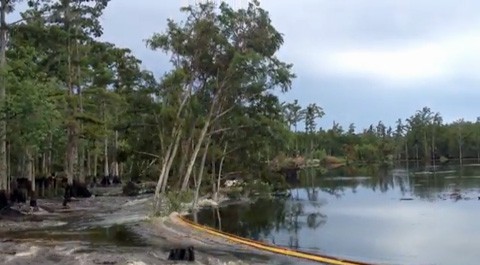 A massive sinkhole caused by the failure of a salt dome cavern owned by Texas Brine LLC (now the subject of a lawsuit by the state of Louisiana) has been under surveillance for more than a year and on Sunday a notable show of its power was caught on film as the hole completely gobbled a grove of trees.

Burps occur when air and gas from deep in the sinkhole bubbles up. It can cause debris to float to the top and, in the past, has caused more trees to be swallowed into the slurry. The monitoring and alert status has been heightened to Code 3, meaning the seismic activity has elevated to a point similar to what has been seen in past monitoring prior to a sloughing on the shore or movement beneath the sinkhole.

And a news broadcast on the big gulp: