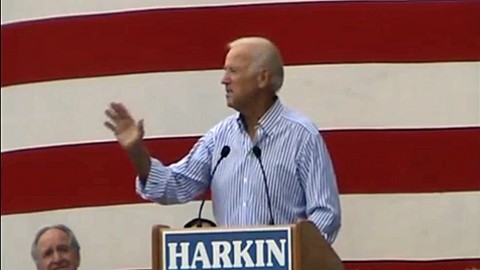 Biden spoke about Syria, and Obama's economic policies, but he also spoke about gay rights, defending his Meet the Press interview in May 2012 at which he came out for same-sex marriage, sprinting ahead of Obama on the issue.

Said Biden at the Harkin event over the weekend:

“A lot of people criticized me for speaking out, not long ago, about gay marriage. I could not remain silent any more. It's time we stopped talking. It’s the civil rights of our day. It’s the issue of our day…..That's why the president eliminated DOMA, Don't Ask, Dont' Tell. That's why he came out against this notiong that marriage can somehow be recognized in one state and denied in another. And when it comes to the rights of – you know the president's phrase, and I'll paraphrase this slightly – that everybody in America should have the dignity to choose who they love and marry who they choose. He believes that but not just because it's a human right because it's about treating everyone with dignity.

Watch Biden's remarks, AFTER THE JUMP…

Previous Post: « Stephen Crohn, ‘The Man Who Can’t Catch AIDS’, Took His Own Life: VIDEO
Next Post: Isaiah Washington Says His Life Was Destroyed by ‘an Agenda’ After His 2007 Anti-Gay Remarks: VIDEO »