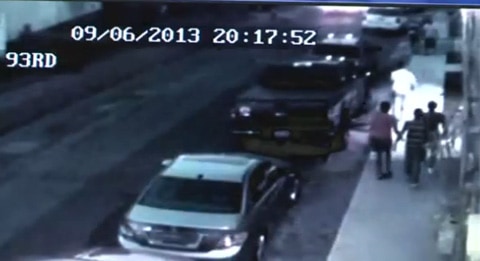 Last week we reported on a gay man beaten by a group of youth outside the Cocktails Lounge gay bar in Cleveland. Jared Fox was sliced by his glasses, his eardrum ruptured, and his face bloodied and bruised.

Now, a 13-year-old boy is under arrest after the bar released surveillance video showing a large group of youths targeting the bar by throwing rocks, some the size of small canteloupes, over the fence at its patrons, FOX8 reports:

“I kicked open the gate and I ran out when I ran out all the kids scattered,” [bar patron Ric] Scardino said.
He said two kids came back and confronted him.

“They thought this was a gun. They saw the black and they said the (bleep)’s got a gun and they took off running,” he said.

Police are trying to determine if the 13-year-old was involved in both incidents. However, Scardino says there have been at least three other attacks.