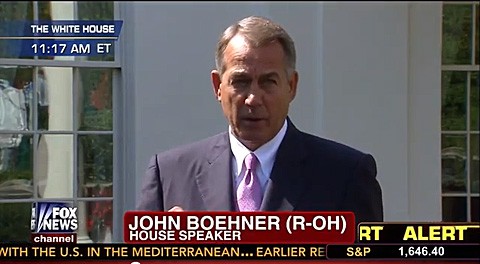 Said Cantor in a statement following Boehner's press conference: "I intend to vote to provide the President of the United States the option to use military force in Syria. While the authorizing language will likely change, the underlying reality will not. America has a compelling national security interest to prevent and respond to the use of weapons of mass destruction, especially by a terrorist state such as Syria, and to prevent further instability in a region of vital interest to the United States."

McCain said U.S. credibility would be "shredded" internationally if Congress thwarts a president after he has already committed to military action.

Sen. Lindsey Graham (R-SC), who also took part in the meeting, said he and McCain would like to see a more sustained military effort but that he intended to support the authorization plan that emerges.

Graham said "a pretty solid plan" was emerging from the administration "upgrade the opposition" and to "degrade" Assad's regime. "We don't want endless war… We want sustainable security. And Syria is a cancer that's growing in the region."

Watch Boehner speak to reporters, AFTER THE JUMP…

Previous Post: « Second Gay Couple Files Suit to Have Ohio Recognize Their Marriage
Next Post: Ben Cohen to Compete on UK’s ‘Dancing with the Stars’: PHOTO »