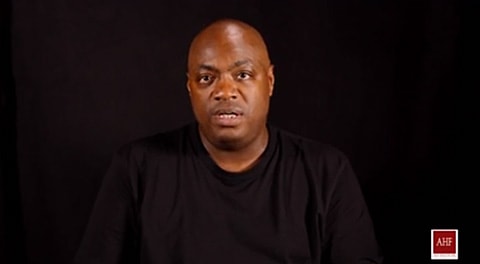 Mister Cee, the hip hop producer and DJ from NYC's Hot 97 who was wrapped up in a scandal last week involving the solicitation of a trans sex worker which led to his resignation (and eventual rescinding of that resignation) from the station, is speaking out in a four-minute PSA about sexual health and STD testing for the AIDS Healthcare Foundation.

Says Mister Cee in the clip:

"The decision I've made this week to open up about my sexuality has definitely been the most difficult thing that I've ever had to do in my life. But I felt like this was the time to do it personally and professionally. For me, I felt worried about how my family would be affected, how my coworkers, and my friends, and even my fans would be affected by this decision, because in this hip hop community of ours, it's not cool to be gay. It's not cool to be bisexual. I felt that if I was to actually be honest about myself, that nobody would actually just want to deal with me anymore. But the more that I kept lying, and the more that I kept trying to deceive you and myself, the more that I was being more closed in, and not really being who I really am.

"I also realized that the more that I kept this secret, and kept lying, and kept trying to be deceitful to the people that I loved, I wasn't really helping myself, or anybody else that could need help out there. But with the grace of family and good friends around me, they made me feel comfortable to exercise my human right for sexual freedom, instead of finding myself being self-detained by discrimination, judgment, criticism, and even violence from my own community. Thank God that I have friends and family that's gonna hold me down and make sure that I'm alright. I got tired of lying and hiding. But I'm here to tell you today that you don't have to lie and hide no more about your sexual freedom."