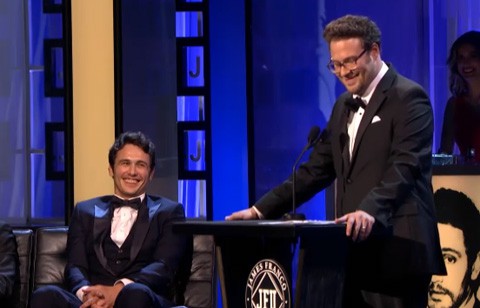 Buzzfeed offers a rundown of the many gay jokes at James Franco's Comedy Central roast, which was broadcast last night. Seth Rogen got "first blood" and let the innuendo flow. By well into the night the gay jokes were so prevalent that Aziz Ansari wondered aloud why there were so many of them?

Head over to Comedy Central to see the rest.

Previous Post: « Celine Dion Starts September with ‘Loved Me Back to Life’: AUDIO
Next Post: Obama to Meet with LGBT Rights Groups During G20 Trip to St. Petersburg, Russia »