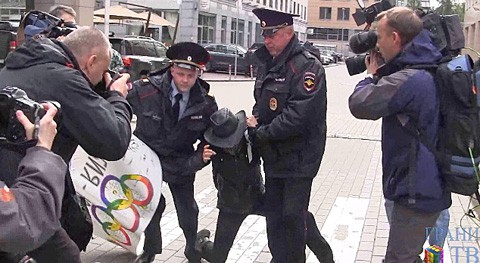 Several LGBT activists was arrested today after protesting at the headquarters for the 2014 Sochi Games.

Among them was Nikolai Alexeyev, who has made headlines recently because of a very public twitter meltdown and his use of anti-Semitic slurs.

While the activists were quite brave in standing up to certain police arrest – pro-gay protests, or even speech, are illegal in Russia – it’s unfortunate that the protesters included in their group known anti-Semite, Nikolai Alexeyev, who refers to Jews as “kikes,” and recently claimed, in the middle of a weeklong anti-Semitic meltdown, that Jews make vodka from their own sperm.

Alexeyev tweeted from inside the police van earlier today.