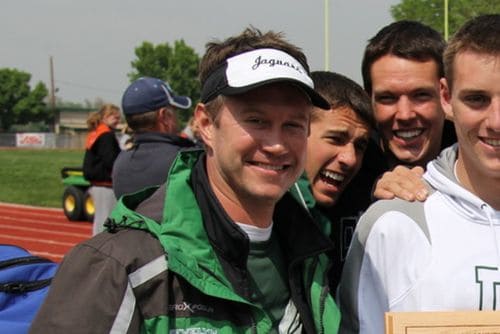 Outsports has the story of Micah Porter, a four-time state champion high school track & field coach in Denver, Colorado who recently came out to his students, the culmination of a four-year journey in which he came out to his wife and two children, school administration officials, and had begun changing in a school bathroom for fear of accusations of impropriety from conservative parents.

Porter now finally appears to have taken the most important step of all:

Porter called his team together before practice a week ago and told them he had some news. He let them know that an article about him would be coming out this week, and that the article discussed him being gay and would talk about his partner, Brandan.

The news was met with the same silence that stared back at him when he came out to his wife four years earlier.

After a few seconds, one of the team leaders – who Porter says could end the season as a conference champion – stood up, shook his hand, told him it didn't matter to him, and asked what that day's practice had in store for them. The rest of the team laced up their shoes and followed suit.

Read the full story at Outsports.

Previous Post: « Lance Bass Knows ‘Tons’ of Celebrities in the Closet and Will Lie to Help Them Stay There: VIDEO
Next Post: Disgusting Russian Propaganda Video Claims Gays Adopt Kids to Rape Them: WATCH »