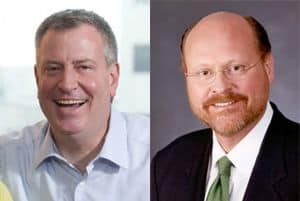 The poll, conducted from Sept. 25 to Oct. 1, showed Mr. de Blasio, the city’s public advocate, with a comfortable lead among white voters and an enormous one among blacks and Hispanics. Only 5 percent of likely voters remained undecided, and less than a tenth of those who favored Mr. de Blasio said there was a good chance they would change whom they supported.

Both De Blasio and Lhota have released the first campaign ads.

Previous Post: « Conan O’Brien’s Gay-Friendly Pasta is Coming for Barilla: VIDEO
Next Post: Russian Imam Wants Elton John Boycott, Calls Him the ‘Devil’s Work in the Shape of a Pederast’ »