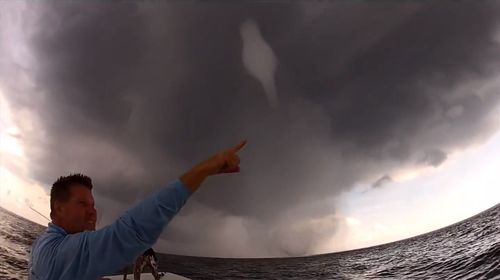 YouTube user Kevin Johnsen posted a video of himself, a friend, and a canine companion enjoying a day on the water. But their ordinary lobster-catching adventure becomes a lot more sinister, and exciting, when several waterspouts show up. Rather than head inland, johnsen rides the waves and meets the natural phenomenon head on.

While catching lobster, multiple waterspouts touched down a short distance away. With plenty of lobster in the box, a great opportunity presented itself to film a close encounter with a weather phenomenon. Fortunately, this time I had a video camera! This is not for anybody to try EVER and this is a delicately calculated risk based on dozens of fluid variables that change by the second. Waterspouts are typically short lived F0 rated tornadoes on the water with winds under 72mph. This was a likely an F0 waterspout, yet was strong enough to completely open my deck hatches and forcibly move the boat more than I expected. The approach was intended to go with the wind at high speed to minimize the effect, yet provide the fullest, safest experience. Again, don't ever do this! If you do, you're gonna need a bigger boat!!

You heard him – don't try this at home.

Warning: This video contains footage that could cause motion- or sea-sickness.

Join the boaters on their high seas adventure, AFTER THE JUMP…