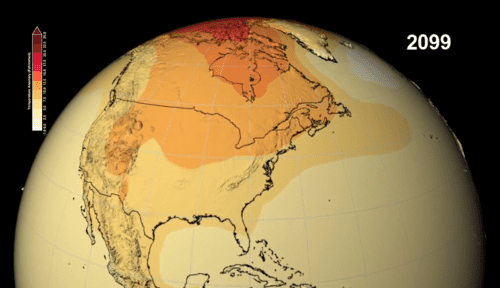 Look out world, things are heating up! A recent study of global climate models has NASA predicting large and uneven temperature and precipitation shifts over the next 87 years (or until the year 2100). A new video indicates the fluctuations through shifting bands of heat and rainfall, and the results don't look pretty.

Of particular interest is the high temperature increase in North America, beginning with the northern stretches of Canada and moving down towards the States. Snow melt, NASA says, will cause less sunlight to be reflected back to space causing that continent to heat up at a faster pace than others. Similarly, the oceans are going to feel the heat less than the rest of Earth's land masses because of their greater ability to absorb the sun's energy.

Grab your personal fan-mister (and a rain jacket), and watch the video, AFTER THE JUMP…