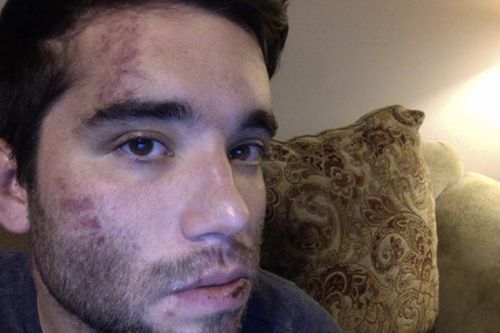 Ben Stoviak and his boyfriend Aaron were attacked outside of Remedy Bar on Butler Street in Pittsburgh, Pennsylvania on Saturday night after being taunted by a group of men.

Last night, a group of men attacked me and my boyfriend on Butler Street in Lawrenceville. After yelling, from across the street, "Faggot!" at us, I replied, "yes, we're faggots!" Immediately after, the group of men ran across the street and began hitting, kicking, and stomping me. The mark on my right cheek is a bootprint. Aaron threw himself on top of me to discourage them from continuing the assault, but they began kicking him in the head, as well.

To the women who saw the ordeal, wrote down their license plate number, and stayed to talk with the police, thank you.

Three of these men have been arrested since the assault. Aaron and I were in the hospital until almost 10 am so that the doctors could take MRI, CT scans, and x-rays to make sure there was no internal bleeding.

I don't ask you to cheer on my romantic and sexual lives. I do, however, expect people not to act violently against one another because they do not share tastes and preferences.

Watch a CBS Pittsburgh news report on the attack and interview with Stoviak,
AFTER THE JUMP…