MSNBC anchor Thomas Roberts is going to host the Miss Universe pageant in Moscow in November, and explains why he "aggressively went after" the job when it came up, in an op-ed on the MSNBC website: "because it is a huge, visible opportunity for LGBT people.  Everywhere." 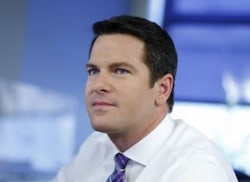 Over the last several months Russian President Vladimir Putin has approved new homophobic laws for his country. Yes, laws that criminalize and stigmatize lesbian, gay, bisexual and transgender people and their allies in Russia.

These actions attracted worldwide news coverage with some critics labeling it: Russia’s dark chapter in the history of gay rights. World leaders have expressed their contempt for these discriminatory laws with President Barack Obama declaring that “nobody’s more offended than me.”

In August, the Miss Universe Organization issued its own statement that Russian laws are “diametrically opposed to the core values” of Miss Universe.

I too am diametrically opposed to these laws and share in the President’s outrage. I am unafraid to say I am proud of my husband and my family—I’m proud of their love for me. I’m proud of the incredible steps forward equality has taken this year.

I’m proud of our nation, which still aspires to live up to the promise of its founding fathers. I am unafraid to tell you how traditional my husband and I are. After thirteen years, we continue to foster and grow our life together, with highs and lows, the folly and the fights. The same things many long term couples experience. Simple things: Trash night, dog walks, the remote control. Tough things: Homophobia, job loss, death.

You can’t get more traditional than that and, above all, we love each other.

So people may wonder: “Thomas, how can you accept this assignment? Shouldn’t you boycott Russia?” I am not going to boycott. Boycotting and vilifying from the outside is too easy. Rather, I choose to offer my support of the LGBT community in Russia by going to Moscow and hosting this event as a journalist, an anchor and a man who happens to be gay. Let people see I am no different than anyone else.

As Towleroad reported in August, Bravo executive and Watch What Happens Live! host Andy Cohen turned down the hosting gig because '[Russia's] discriminatory policies make it unsafe for the gays who live there and gays coming to work or visit…The law is that anyone under suspicion of homosexuality can be arrested'…adding that he 'didn't feel right as a gay man stepping foot into Russia.'"

It's unclear what kind of statement Roberts will make at the pageant to assert the statements he has made in his op-ed, though as a news anchor on MSNBC he has been an outspoken advocate for LGBT rights.

Elton John recently announced he would play two concerts in Russia  because, "As a gay man, I can't leave those people on their own without going over there and supporting them. I don't know what's going to happen, but I've got to go."

He later said that he would not speak out against the government from the stage but preferred to meet with Russian leaders.