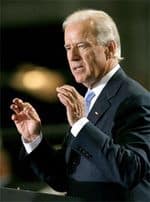 Vice President Joe Biden has canceled his keynote speech to the Human Rights Campaign on Saturday, the AP reports :

Biden was scheduled to deliver the keynote address to about 3,400 people at the Human Rights Campaign's annual dinner on Saturday. It's the nation's biggest lesbian, gay, bisexual and transgender civil rights group, and gay and lesbian activists were among President Barack Obama's most loyal supporters during his re-election campaign.

But the partial shutdown of the federal government has led Obama and now Biden to cancel a number of events. Obama canceled an appearance at a glitzy Congressional Hispanic Caucus event Wednesday and has scaled back his upcoming trip to Asia.