Approximately 20 Ole Miss football players were involved in a mass heckling incident at a University of Mississippi production of The Laramie Project, the Moises Kaufman play about the Matthew Shepard murder. 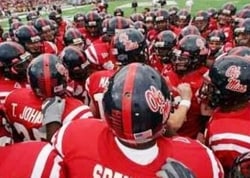 According to the play's director and theater faculty member Rory Ledbetter, some audience members used derogatory slurs like "fag" and heckled both cast members and the characters they were portraying for their body types and sexual orientations. Ledbetter said the audience's reactions included "borderline hate speech."

The football players were at the play because of a theater course requirement.

"The football players were certainly not the only audience members that were being offensive last night. But they were definitely the ones who seemed to initiate others in the audience to say things, too. It seemed like they didn't know that they were representing the university when they were doing these things."

Junior theater major Garrison Gibbons said the incident offered a real-life example of the play's subject matter: “I am the only gay person on the cast. I played a gay character in the show, and to be ridiculed like that was something that really made me realize that some people at Ole Miss and in Mississippi still can’t accept me for who I am.”