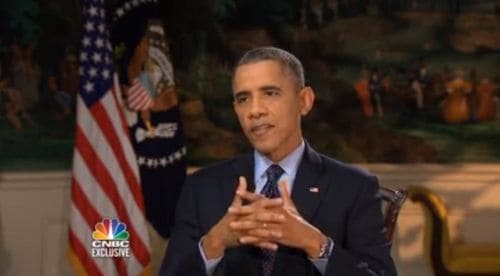 President Obama sat down for a CNBC interview and shared his reaction to Pope Francis's recent statements regarding the Catholic Church's obsessive focus on gay marriage and women's rights. He seemed to have nothing but admiration for the guy.

"I have been hugely impressed with the pope's pronouncements," Obama said, describing Francis as "somebody who lives out the teachings of Christ. Incredible humility — incredible sense of empathy to the least of these, to the poor."

"And that spirit, that sense of love and unity, seems to manifest itself in not just what he says, but also what he does. And, you know, for any religious leader, that's something — that's a quality I admire.

"And –I would argue for any leader period — that's a quality that I admire."

Some current American leaders (e.g. certain members of Congress) could certainly learn a thing or two about love and unity. Obama, for his part, really seemed to avoid the meat of the Pope's statements. Was he too afraid to interpret them further, or simply being respectful?

Watch the interview clip, AFTER THE JUMP…