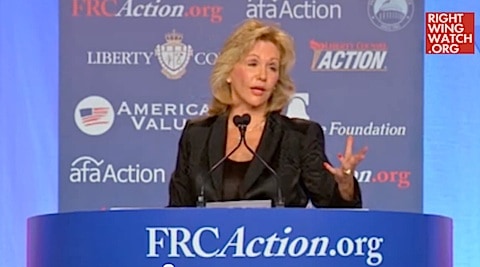 American Family Association radio host Sandy Rios took the podium at the Values Voters Summit over the weekend to toot about how Christian conservatives are being threatened in America, citing a letter from the Southern Poverty Law Center and other civil rights groups urging Republicans to stay away from the Summit, Right Wing Watch reports.

She also took the opportunity, on the anniversary of Matthew Shepard's murder to tell those assembled that it was a "complete fraud", citing claims in a recent book by wingnut Stephen Jimenez that Shepard's death was the result of "a drug deal gone bad".

The Matthew Shepard Foundation has blasted the Jimenez book, saying "Attempts now to rewrite the story of this hate crime appear to be based on untrustworthy sources, factual errors, rumors and innuendo rather than the actual evidence gathered by law enforcement and presented in a court of law."