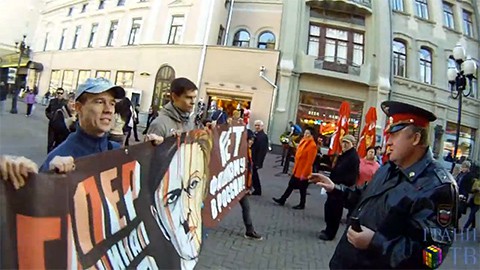 Earlier this week, a video surfaced showing what reality looks like in Putin's Russia where disseminating "propaganda for nontraditional sexual relationships" is a crime. The New York Times reports how a small group of protesters, who carried a banner that read, "Hitler Also Began With the Gays. No to Fascism in Russia," were swiftly intercepted by police. At first, bystanders were compelled to stop the police from using excessive force against the activists. However, once those bystanders learned what the protest was about, they were less sympathetic:

The clip is not subtitled, but the intervention of the bystanders begins when an older woman steps in and tells the officers, “You can’t act like that.” She then turns to a man behind her and says, “Hey man, help out.” The man, wearing a black hat and a leather jacket, then says: “Major. Officer. What did they do?”

A short time later, as the confusion continues, a female protester in a black jacket and a rainbow scarf explains to the woman and an officer, “We are protecting the rights of L.G.B.T.”

The officer asks, “What’s that?”

The older woman asks, “You’re for them?”

The protester says, “We’re for them.”

The older woman says: “Ohhhhhhhh no. Then no.”

The protester responds, “Hitler started with the gays.”

The older woman says, “This is the decline of morality.”