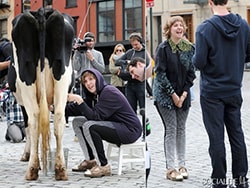 All Kanye all the time: Mr. West takes over Kimmel, says Kim Kardashian deserves a star on the walk of fame.

Andrew Sullivan on the ever-shrinking Republican Party: "There is effectively no Republican party any more. There is a radical
movement to destroy the modern American state and eviscerate its
institutions in favor of restoring a mythical, elysian, majority-white,
nineteenth-century past."

Usher reminds us he still has an impressive six pack.

Fed up with government shutdown nonsense, Jon Stewart turns to his wheel of happy stories. One of the options? "Full Frontal George Clooney," complete with a real NSFW image of full frontal nudity (though probably not of George Clooney, by the looks of it).

Lena Dunham milks a cow for Billy on the Street. 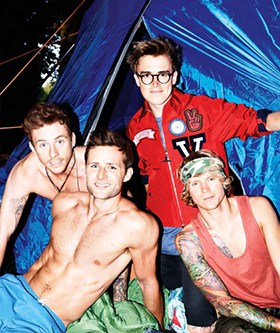 The Jonas Bros reunion tour has been cancelled amidst rumors of a breakup.

Two years since his passing, the ashes of legendary gay rights activist Frank Kamey have still not been laid to rest.

For the Bible tells me so? Academic claims Jesus Christ was invented: "Ancient confessions recently uncovered now prove, according to [American Biblical scholar Joseph] Atwill,
that the New Testament was written by first-century Roman aristocrats
and that they fabricated the entire story of Jesus Christ."

Priorities: the government may be shut down, but the congressional gym remains open.

Jude Law's son is kind of a Baldwin.