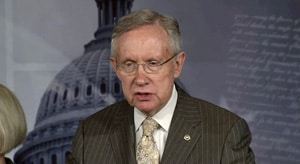 Senator Majority Leader Harry Reid, who promised in a Pride statement earlier this year that he would bring the Employment Non-Discrimination Act (ENDA) to a vote "soon" will do so before Thanksgiving, and will make that announcement today according to tweets from Buzzfeed's Chris Geidner and the HuffPost's Amanda Terkel.

The Senate will convene Monday afternoon at 2:00 p.m. At that time, Reid will announce his plans to bring up ENDA during the current work period, which ends the week before Thanksgiving. Reid has long been a supporter of ENDA, cosponsoring it as early as 1997.

Sen. Jeff Merkley (D-Ore.) introduced the bill in the Senate on April 25, and it currently has 54 cosponsors. Every single Democratic senator has signed on, with the exception of Joe Manchin (D-W.Va.), Bill Nelson (D-Fla.) and Mark Pryor (D-Ark.).

"I thank Majority Leader Reid for committing to bring ENDA to the floor this work period," Merkley said in a statement to The Huffington Post. "Americans understand that it’s time to make sure our LGBT friends and family are treated fairly and have the same opportunities. Now it's time for our laws to catch up. People should be judged at work on their ability to do the job, period.”