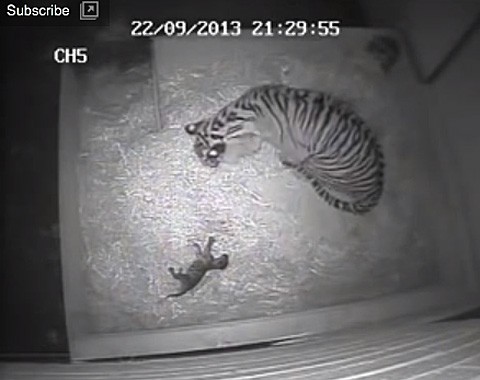 A Sumatran tiger gave birth at the ZSL London Zoo this week for the first time in 17 years. The zoo captured the rare birth on a webcam.

The pregnancy, which lasted about 105 days, was kept secret by zookeepers who kept a careful watch on the first-time mother through hidden cameras so they would not disturb her. The cub was born six months after the opening of "tiger territory" at the zoo, designed to encourage breeding of the critically endangered sub-species of tiger.

Zookeeper Paul Kybett said everyone at the zoo was "over the moon" about the birth.

"We were nervous about the pregnancy, as it was Melati's first cub and we didn't know how she'd react. When it came to her due date, we were all watching our monitors with bated breath. The actual birth happened very quickly and Melati's maternal instincts kicked in immediately as she started licking the cub all over and it soon began wriggling around – we couldn't have asked for a smoother birth."