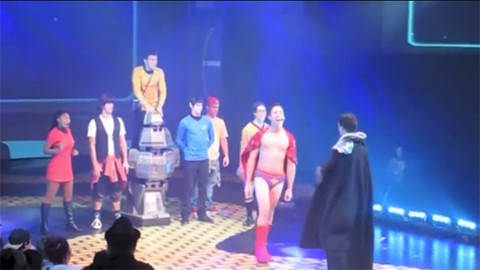 As Halloween draws near, many of you will likely be getting your ghoul on and partaking in special Halloween shows and events. One such attraction, Halloween Horror Nights at Universal Studios Hollywood, involves a play of sorts titled Bill and Ted's Excellent Halloween Adventure. It has drawn attention as of late for the across-the-board offensive attitudes on display, including plot lines and "jokes" that are blatantly homophobic. Most notably, in this year's play, Bill & Ted are transported to the Land of Oz via tornado (or as they call it, the "ghost of Cory Monteith") where they encounter Superman who promises to help them fight the evil witches of Oz. This all goes awry when Superman accidentally gets dusted with "fairy dust" by one of the witches and becomes gay. Vice has the report:

After becoming gay, Superman's voice and posture changes. His lips purse, his toes point inward, and his wrists become limp. His new voice sounds like a homophobic uncle doing a drunken impression of Richard Simmons, complete with lisps and frequent use of the word "faaaaaaabulous!" […]

Obviously, now that Superman is gay, he is not going to be of any use to them. "Who could possibly make a worse Superman?" asks Bill. "Ben Affleck?" responds Ted. […]

Then, because Superman is now gay, he minces over to Bill and Ted, blows kisses at them, and slaps Ted on the ass. As he does this, Bill and Ted say "awwww dude!" with disgusted voices.

After a few more attempts at molesting Bill and Ted, Superman ends up aboard the Starship Enterprise, where he runs into Superman villain General Zod. General Zod tells Superman to get on his knees. Because Superman is now gay, he assumes this is an invitation to give Zod oral sex. "Finally!" he squeals.

Also aboard the Starship Enterprise, the gang runs into George Takei. Because George Takei is gay too, he and Superman share an instant mutual attraction. "Who's your friend?" asks George, in the same lisping, gay-minstrel voice that Superman uses.

Before Bill and/or Ted can answer, Superman interrupts by yelling "Hey daddy!" to George…George and Superman disappear to have sex. "Time to boldly go where no man has gone before!" says George, as they exit the stage.

This is the last we see of Superman in the play.

Previously, in 2006, Universal Studios Hollywood offered a version of the Bill and Ted play that featured a gay Superman more interested in ribbon-dancing and saying the word "rainbows" than fighting evil.