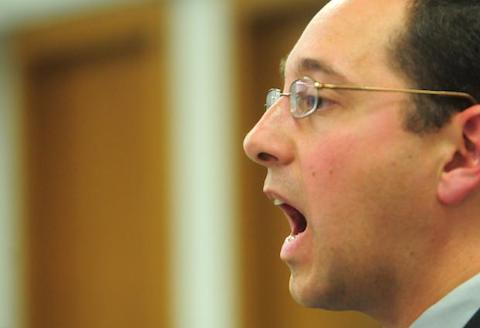 If you don't recall the name Andrew Shirvell, here's a primer: he's a former assistant attorney general for the state of Michigan, who lost his damned mind and engaged in a one-man hate-war in 2010 against gay then-student body president of the University of Michigan Chris Armstrong.

After creating a blog flooded with anti-gay attacks against Armstrong and having been caught protesting with Westboro Baptist Church, Shirvell was placed on a leave of absence from his work. He was later scheduled for court hearings in regards to his actions. He even made an appearance on The Daily Show to defend his actions, which went about as well as one would expect. Shirvell was then fired from his position and subsequently sued by Armstrong for harassment and ordered to pay Armstrong $4.5 million in damages. Armstrong founded a scholarship fund for students who have been victims of bullying while Shirvell went on unemployment benefits.

And those are only about half of the articles we've written on the man.

Now, Shirvell has crawled back out from whatever rock he was hiding under to sue his former boss, former attorney general Mike Cox, for wrongful termination. Current AG Blll Schuette is also named in the suit along with four others. Shirvell is seeking a monetary award, of course, but is also demanding his old job back, because that will go over well and won't make for an awkward work environment. Cox is convinced that the suit is a joke, while Schuette's spokeswoman had no comment.