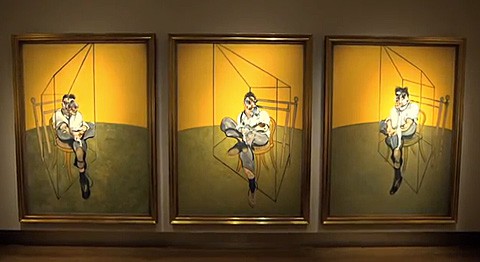 Francis Bacon's triptych 'Three Studies of Lucian Freud' has sold for $142 million, the highest price ever paid for a painting at auction, the Guardian reports:

The 1969 triptych, never before offered at auction, had carried a pre-sale estimate of about $85m. In the end it easily eclipsed the $119.9m price of Edvard Munch's The Scream, achieved in May 2012 year at Sotheby's. The previous record for a Bacon work of art was $86.3m set in 2008.

The monumental painting depicts the Dublin-born painter's friend and fellow artist Lucian Freud on a chair, with a view from each side and one face-on. Christie's called it "a true masterpiece that marks Bacon and Freud's relationship" and their "creative and emotional kinship".

With bidding starting at a whopping $80m, it sold after a protracted bidding war both in the packed New York salesroom and via telephone. Christie's did not disclose the identity of the successful buyer.

Watch Christie's explain why the painting is so significant in a fascinating 4-minute featurette surrounding the sale, AFTER THE JUMP…