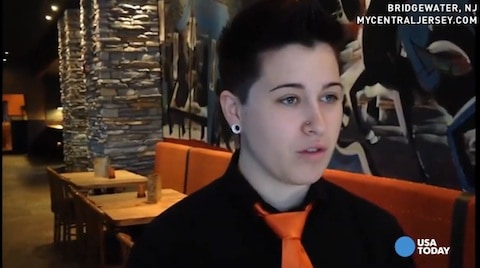 Dayna Morales, the Bridgewater, NJ waitress accused of hoaxing the public about a receipt she received with no tip and an anti-gay note, is apparently a pathological liar, Gannett reports:

But Morales has been caught in multiple lies, telling co-workers she shaved her head because she had brain cancer and later telling them it was her friend who had brain cancer, her colleagues and friends said.

They said she also told co-workers at a day care center where she once worked that Superstorm Sandy severely damaged her home in Stony Point, and sent a boat into her living room. Concerned co-workers dropped by her home and found only minor damage to the carpet by her front door and no sign of a boat, they said.

“Every story she comes up with has a lie,” said Julie Howat, 23, of Pomona.

Morales also told people she was a former Marine who served in Afghanistan and that she was the sole survivor of an explosion that killed everyone in her platoon. But:

A spokesman for the Marines, Major Shawn Haney, said in an email that Morales had served in the U.S. Marine Corps Reserve from July 13, 2009, to May 21, 2013 at the rank of Lance Corporal, E-3, as an administrative specialist. She was assigned to the Marine Air Group 49, 4th Marine Air Wing out of Newburgh and deployed from April to June 2012 to Romania as part of the Black Sea Rotational Force 11.

“There is no indication of combat service in Iraq or Afghanistan,” he added in a follow-up email. Also, “While (Morales) did not fulfill her reserve obligation, per the Privacy Act, administrative actions are not releasable. The same applies to character of service and type of discharge.”

Morales was dishonorably discharged from the Marines after not showing up for drills, according to NBC New York.

Watch their report and interviews with people about Morales’s lies, AFTER THE JUMP…