Hallmark made headlines earlier this week after changing the classic text of a Christmas Carol on a new  ornament for the 2013 holiday season, replacing "gay apparel" from "Deck the Halls" to "fun" apparel. 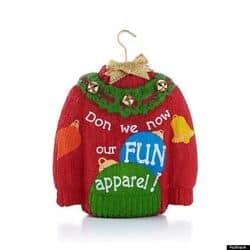 They defended the move in a statement earlier this week.

"When the lyrics to 'Deck the Halls' were translated from Gaelic and published in English back in the 1800s, the word 'gay' meant festive or merry," Kristi Ernsting told The Huffington Post in an email. "Today it has multiple meanings … the trend of wearing festively decorated Christmas sweaters to parties is all about fun, and this ornament is intended to play into that, so the planning team decided to say what we meant: 'fun.'"

She added: "That’s the spirit we intended and the spirit in which we hope ornament buyers will take it."

After anger from the public, the company has changed its tune, the AP reports:

The company updated its statement Thursday, saying it was surprised by the public's response and that it now realized it shouldn't have changed the lyrics.

"We've been surprised at the wide range of reactions expressed about the change of lyrics on this ornament, and we're sorry to have caused so much concern," the statement read. "We never intend to offend or make political statements with our products and in hindsight, we realize we shouldn't have changed the lyrics on the ornament."

But Hallmark spokeswoman Linda Odell said the company has no plans to stop selling the ornament.