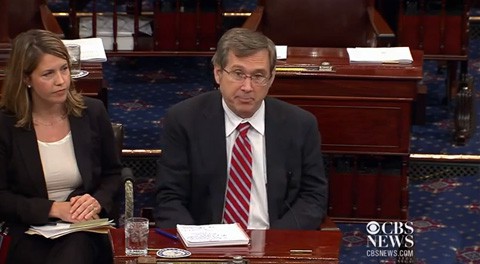 Senator Mark Kirk (R-IL) was one of seven Republican Senators who voted to invoke cloture this evening on the Employment Non-Discrimination Act (ENDA) which would protect LGBT citizens in the work place.

It was Kirk's first floor speech since a debilitating 2012 stroke.

"I have been silent for the past two years due to a stroke, under two years ago. I have risen to speak because I believe so passionately in enacting the ENDA statute. This is not a major change to law. I would say it is already the law in 21 states. I think it’s particularly appropriate for an Illinois Republican to speak on behalf of this measure, in the true tradition of Everett McKinley Dirksen and Abraham Lincoln — men who gave us the 1964 Civil Rights Act and the 13th amendment to the Constitution. With that, I would suggest the absence of a quorum.”