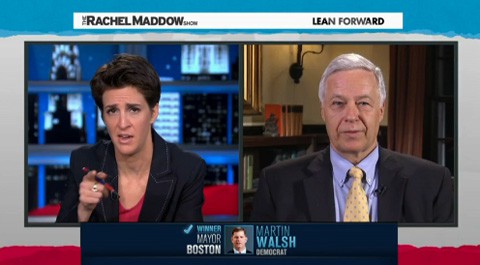 Rachel Maddow speaks to Rep. Mike Michaud (D-ME) who came out of the closet earlier this week in response to what he called a "whisper campaign" by opponents, spoke to Maddow last night in a segment assessing the state of the Maine gubernatorial race.

"I have no idea who was doing it – all I know is that there was speculation out there that I was gay and I wanted to be upfront, be honest with the voters of the state of Maine, 'yes I am but what should that matter? I'm the same person today that I was last week, last year and the year before.' I'm Mike, and I want to talk about the issues and it was very important for me to put that on the table so we can move on and talk about issues."