The troubling religious exemption in the Employment Non-Discrimination Act (ENDA), which we've reported here has caused much concern among some activist groups, gets ripped by the New York Times: 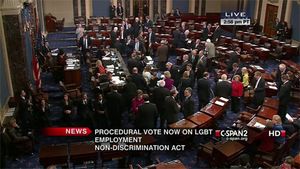 The Employment Nondiscrimination Act, however, has a significant flaw — a terribly broad religious exemption. The exemption would extend beyond churches and other houses of worship to any religiously affiliated institution, like hospitals and universities, and would allow those institutions to discriminate against people in jobs with no religious function, like billing clerks, cafeteria workers and medical personnel.

The exemption — which was inserted to appease some opponents who say the act threatens religious freedom — is a departure from the approach of earlier civil rights laws. And though the law would protect millions of workers from bias, the exemption would give a stamp of legitimacy to the very sort of discrimination the act is meant to end. Any attempt to further enlarge the exemption should be rejected.