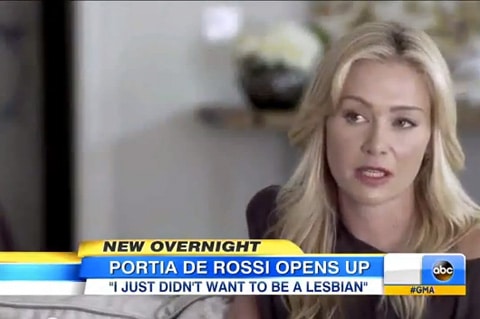 Portia de Rossi opened up about the fears she had before coming out and getting married to Ellen DeGeneres, in a new episode of the UK show The Conversation, hosted by Amanda De Cadenet.

"I just didn't want to be a lesbian. I'd never met one for a start and I just thought they were strange and that they hated men and they were very serious…I had these ridiculous images in my head and there were no out celebrities or politicians or anybody that I could look to and go, 'Oh, I could be like that'…There was nobody that I could say, 'I could date her and I want to be like her'…I just kind of thought I don't want to live like this. I don't have to, I don't need to, I just shut down the emotional life."

Watch an ABC News report on the interview, AFTER THE JUMP…

Previous Post: « One Direction Goes Back in Time for ‘Story of My Life’: VIDEO
Next Post: Human Rights Campaign Going International with Help from Republican Billionaires »