A fireball was seen streaking over the American southwest last night and sightings were reported in Los Angeles, Arizona, Utah, and Las Vegas, CNN reports: 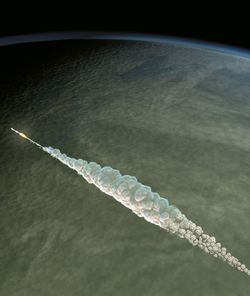 Matthew Isaacs, from Mission Viejo, said he was driving when he saw the flash of light.

"I saw this big, greenish flash like, light up the sky. It was headed pretty sideways from like, east to west. I thought, 'Is that a firework?' And then I realized, that couldn't be that big. It's just in the middle of nowhere in a totally dark area where there's no houses or anything where anyone would shoot fireworks. I thought, 'Man, it must have been a meteor,'" Isaacs told KCBS.

The light most likely came from the South Taurids meteor showers. These meteors are generally the most visible in the first half of November, the American Meteor Society says.

In related news, scientists are raising the alarm that the chances of a massive meteor, like the one that entered the atmosphere over Russia earlier this year, are much greater than previously thought:

The asteroid that exploded on 15 February this year near the city of Chelyabinsk in the Urals region of Russia was the largest to crash to Earth since 1908, when an object hit Tunguska in Siberia. Using video recordings of the event, scientists have now reconstructed the asteroid's properties and its trajectory through Earth’s atmosphere. The risk of similar objects hitting our planet may be ten times larger than previously thought, they now warn.
…

Of the millions of estimated near-Earth asteroids 10–20 metres in diameter, only about 500 have been catalogued. Models suggest that an object the size of the Chelyabinsk asteroid hits Earth once every 150 years on average, Brown says. But the number of observed impacts exceeding 1 kiloton of TNT over the past 20 years alone hints at an actual impact risk that may be an order of magnitude larger than previously assumed, Brown and his co-workers show in their study3. Scanning the visible sky with a view to identifying approaching small objects might be a prudent response, he suggests. One such asteroid detection and early-warning system, ATLAS, is being established in Hawaii.